The battlefield site is the final resting place of soldiers killed in action, lying in unmarked graves. Some of the names of these soldiers have been lost to history, but those known have been identified on the In Memoriam plaque.

This monument to the joint U.S. Legion and Kentucky Militia forces was erected in 1935 by the Ohio State Archaeological and Historical Society to honor those killed in action, those who died from wounds sustained in the battle, and those who were wounded but able to return to their homes and families. 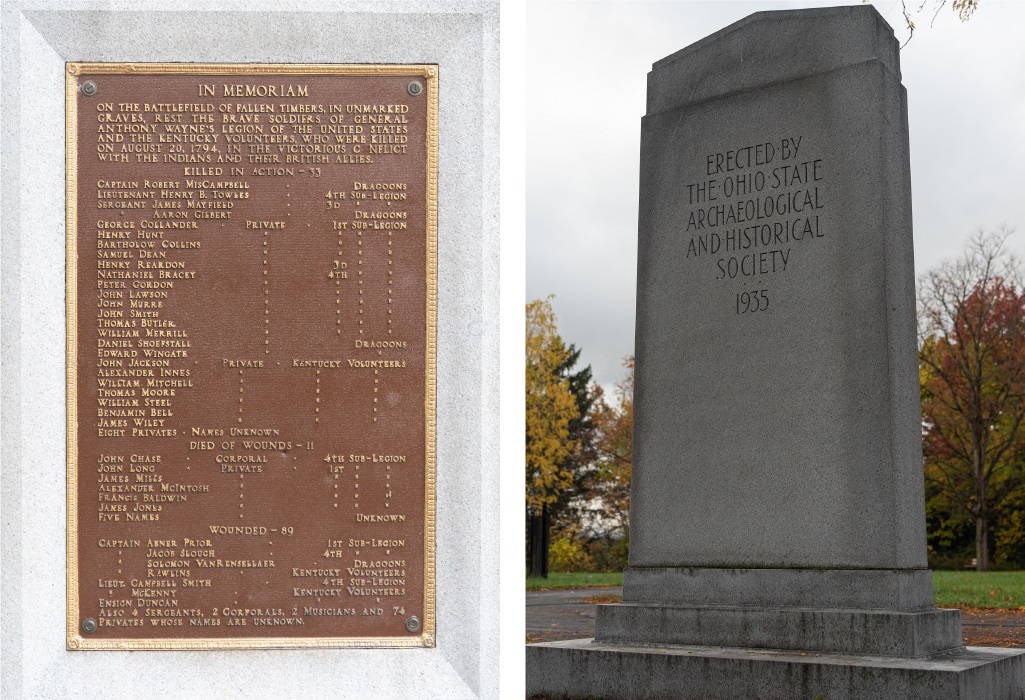 Monument to the Battle of Fallen Timbers

In 1929, the significance of this battle in American history was commemorated with an impressive stone and bronze monument.

Clarissa Cook Moore, daughter of Daniel F. Cook (protector of Turkey Foot Rock in 1897), donated the high bluff for the monument site to the Ohio State Archaeological and Historical Society (now Ohio History Connection) in 1921. The bluff overlooked Turkey Foot Rock and what was thought to be the site of this famous battle.

Bruce Wilder Saville, a graduate of The Ohio State University and veteran of World War I, was the artist chosen to create the Battle of Fallen Timbers Memorial. Saville modeled the monument in the heroic neoclassical style and first worked from a plaster prototype before the final monument was cast. 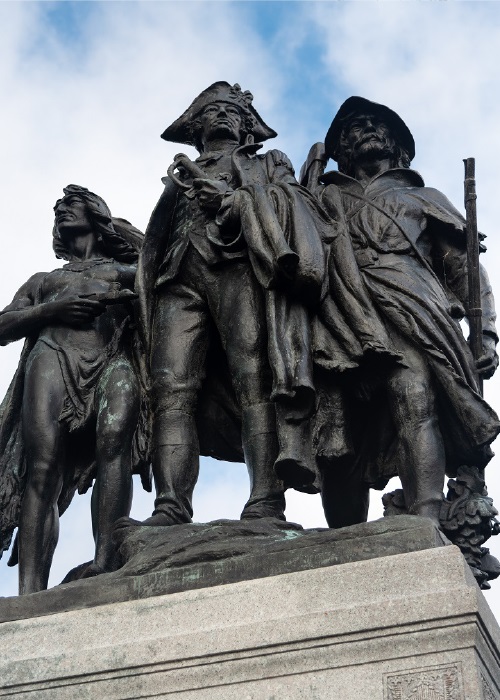 On this rock, according to tradition, Chief Turkey Foot of the Ottawa Indians rallied his warriors during the Battle of Fallen Timbers.

Here he was killed, and for many years Tribesmen made offerings of tobacco on the rock to appease the Great Spirit. 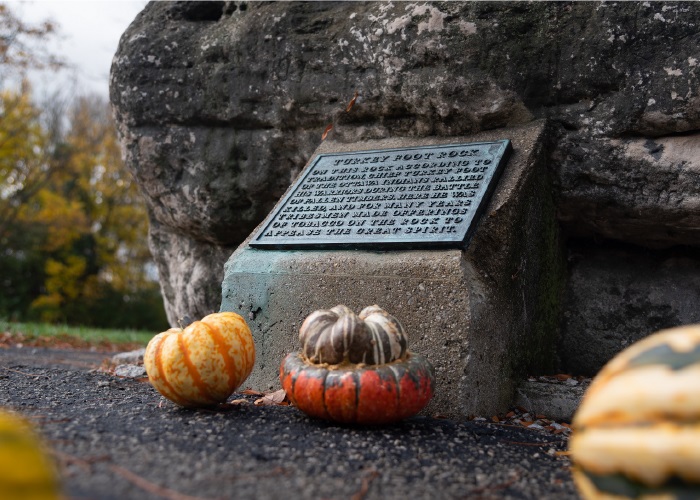 This site is considered sacred ground to the Native Nations that participated in this historic battle, and descendants of those brave warriors still return to the site to honor the men who fought and sacrificed their lives to maintain their tribal lands.

These Nations have not forgotten that their history is entwined with this battle, which had significant consequences to each. This battle was the beginning of what would leave to the Indian removals of the 1830s and 1840s, severing these Nations from the lands of their ancestors.

The marker that honors the individual Tribal Nations that participated in the Battle of Fallen Timbers was erected during the Bicentennial of the Battle on August 20, 1994. A public dedication and a Native American Powwow were held at the monument site to pay tribute. 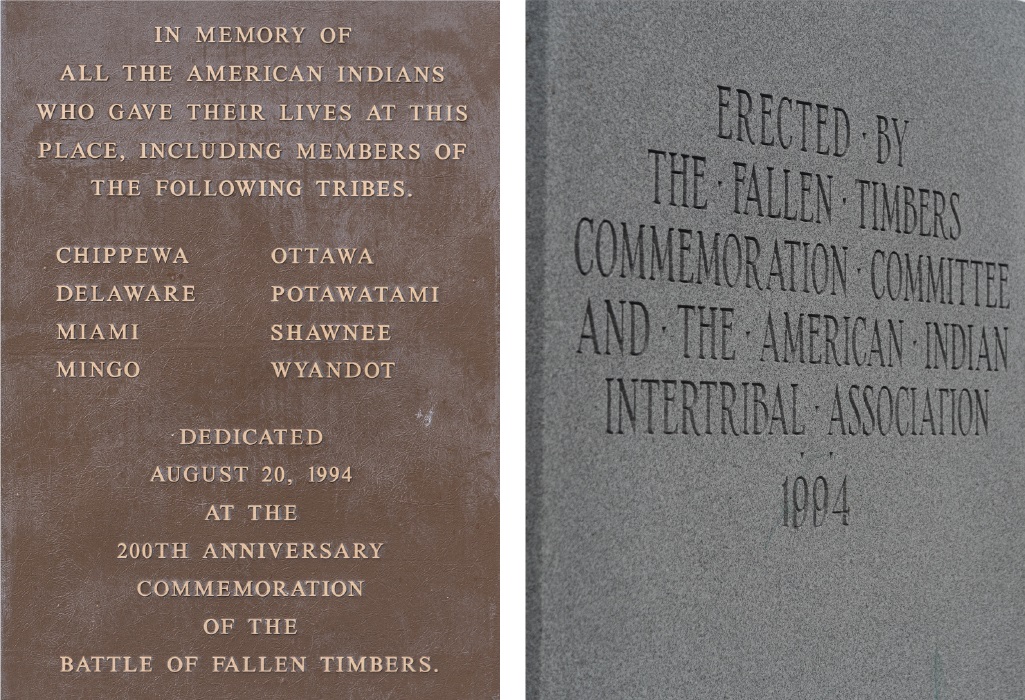 The Fallen Timbers Battlefield Monument Site was designated as a Registered National Historic Landmark in 1962. 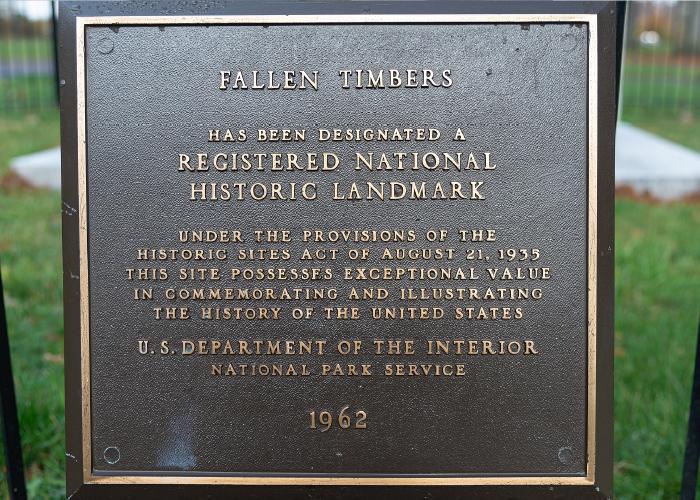 Rather than honoring specific individuals, the bronze figures atop the monument represent soldiers from the three forces involved in the Battle of Fallen Timbers.

The base of the monument features an additional bronze relief panel on each of the four sides. This panel honors the Treaty of Greenville, which confirmed territorial boundaries set in earlier treaties and ended the conflict between the United States and the Native Confederation.

The Greenville Treaty
To General Anthony Wayne, who organized the "Legion of the United States" by order of President Washington and defeated Chief Little Turtle's Warriors here at Fallen Timbers on August 20, 1794. This victory led to the Treaty of Greenville, August 3, 1795, which opened much of the present state of Ohio to white settlers. 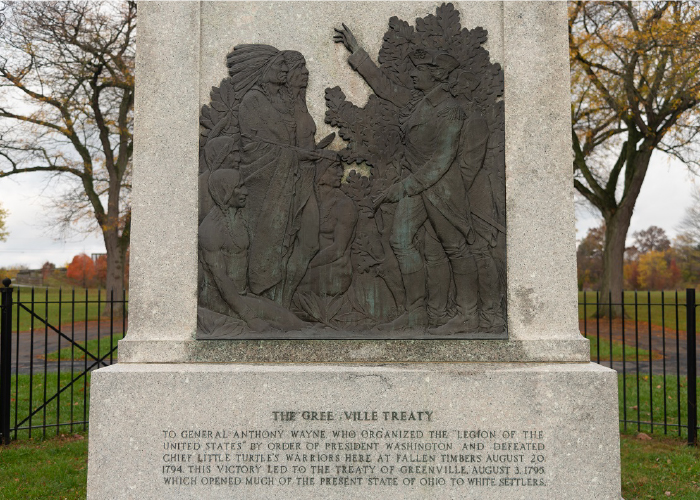 The base of the monument features an additional bronze relief panel on each of the four sides. This panel honors the pioneers who settled these lands.

Onward in Peace
To the Pioneers of Ohio and the great Northwest. 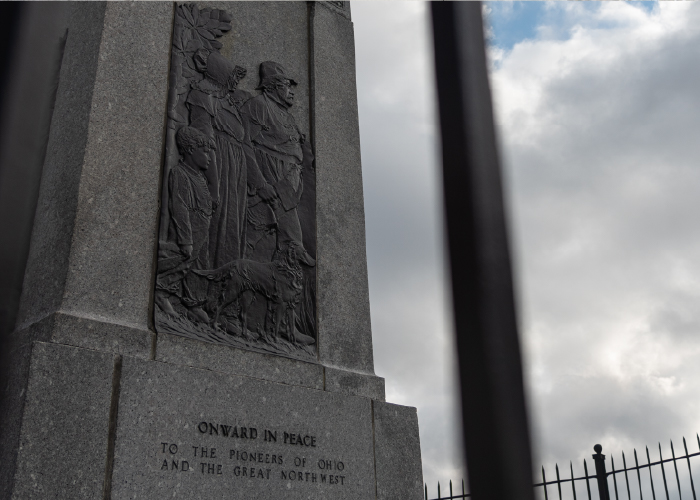 The Battle of Fallen Timbers

The base of the monument features an additional bronze relief panel on each of the four sides. This panel honors Chief Little Turtle and the Native Confederation. 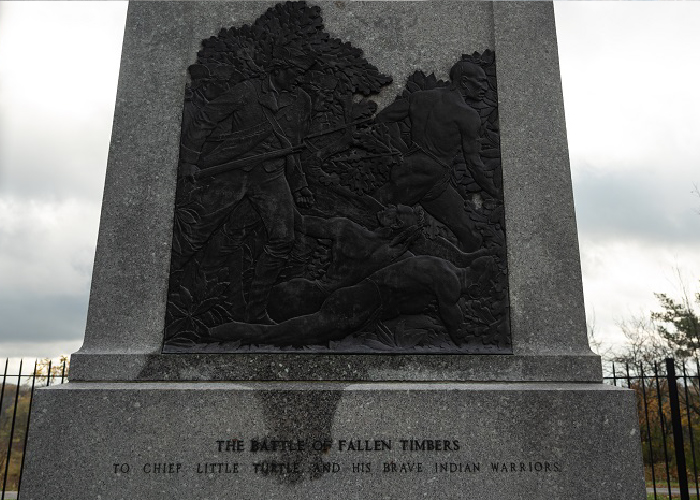 The base of the monument features an additional bronze relief panel on each of the four sides. This panel honors the white settlers killed in more than a decade of conflicts in this western frontier.

Indian Warfare
In memory of the white settlers massacred 1783-1794. 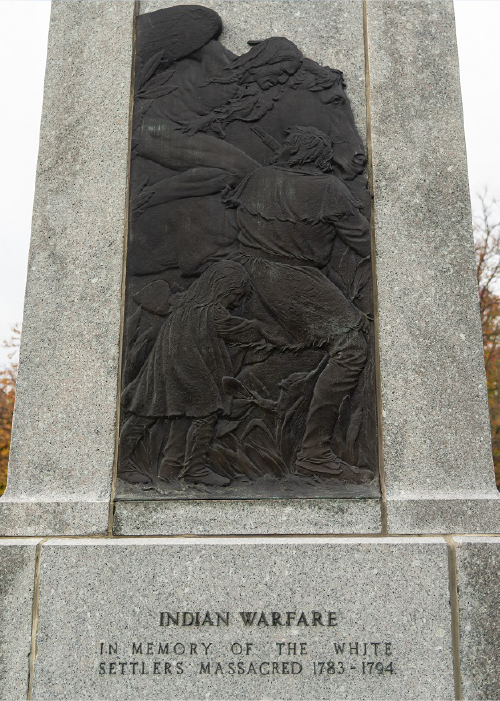