This marker, erected in 1955 by The Historical Society of Northwest Ohio, provides an overview of the conflicts that led to the Battle of Fallen Timbers, resulting in the Treaty of Greenville, by which the Indians ceded most of the future state of Ohio and significant portions of what would become the states of Indiana, Illinois, and Michigan.

When American pioneers attempted to settle the area north and west of the Ohio River, following the Ordinance and 1787, the Indians, aided by the British in Canada, fought valiantly and fiercely for their homes in the Ohio country. It required three American armies to break the Indian resistance. The first army (1790) under Gen. Josiah Harmar met defeat at the Miami Indian Villages (Fort Wayne, Indiana). The second (791) under Gov. Arthur St. Clair was ambushed and suffered severe losses on the banks of the Wabash (Fort Recovery, Ohio). the third army, the Legion of the United States, under the command of Gen. Mad Anthony Wayne, achieved decisive victory at the Battle of Fallen Timbers, Aug. 20, 1794. The defeat of the hostile Indians was made complete, following the battle, when the gates of Fort Miamis, the stronghold of their British allies, were closed to them and when promises of aid were not forthcoming. Beaten in combat and deserted by the British, the Indians signed the Treaty of Greenville, Aug. 3, 1795. They were thereby placed under the control of the United States, and the Northwest Territory was opened, in part, to peaceful White settlement. 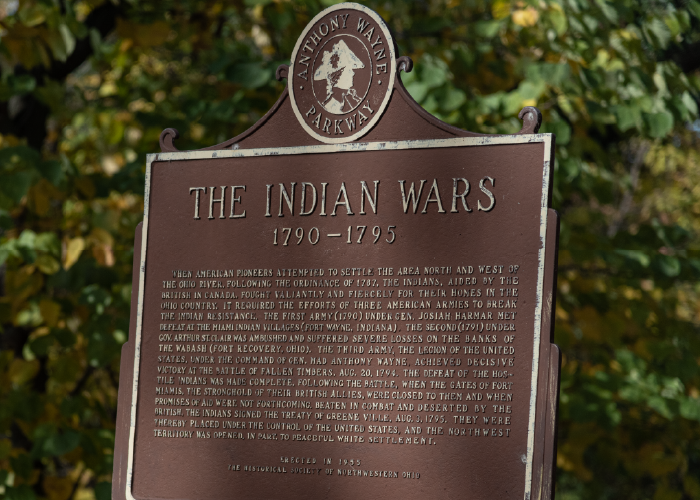 This marker describes Private Patrick Russell's effort to protect unarmed prisoners against a violent attack. It was erected in 2013 by the Fort Meigs Association, the Metropolitan Park District of the Toledo Area, the 41st Regiment of Foot MLHG and The Ohio Historical Society.

At this site on May 5, 1813, American prisoners of war, captured in the engagement now known as "Dudley's Defeat", were exposed to an escalating level of physical violence by the American Indian forces allied to Great Britain. The violence reached a level of deadly force as the prisoners were shot, tomahawked, and scalped. Private Russell, of the 41st Regiment of Foot, attempted to intervene in the attack against the unarmed prisoners, but was shot and killed. Following the attack, approximately 40 Americans and Patrick Russell lay dead. For attempting to restrain the actions of others against unarmed prisoners, Russell made the supreme sacrifice. 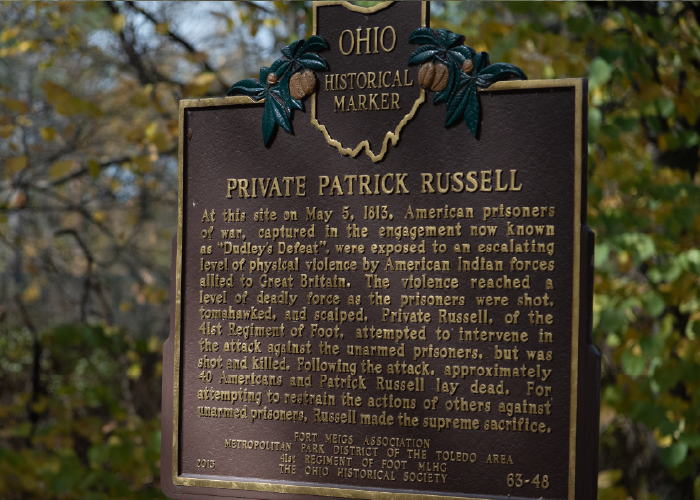 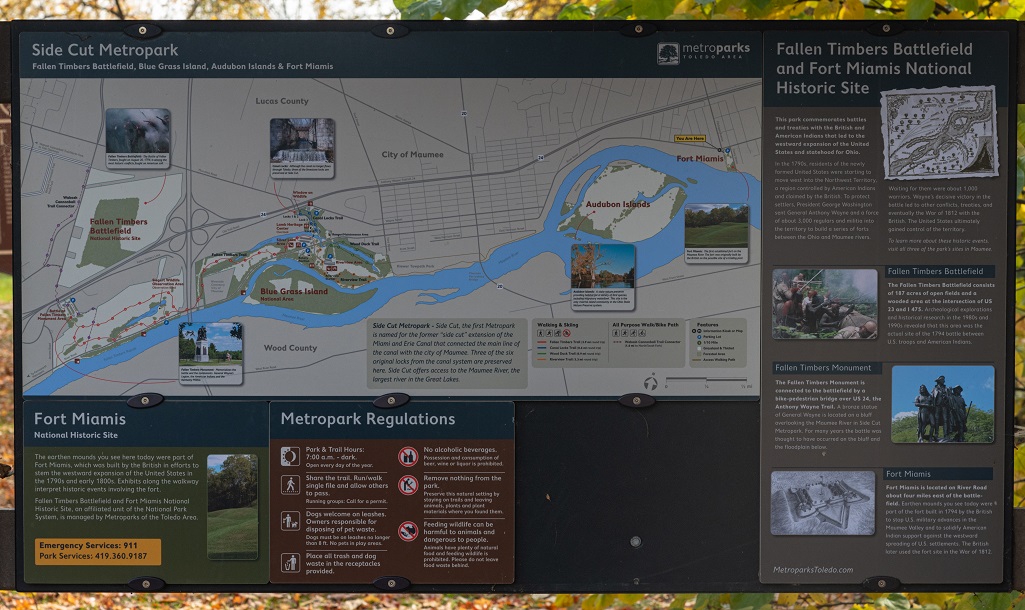 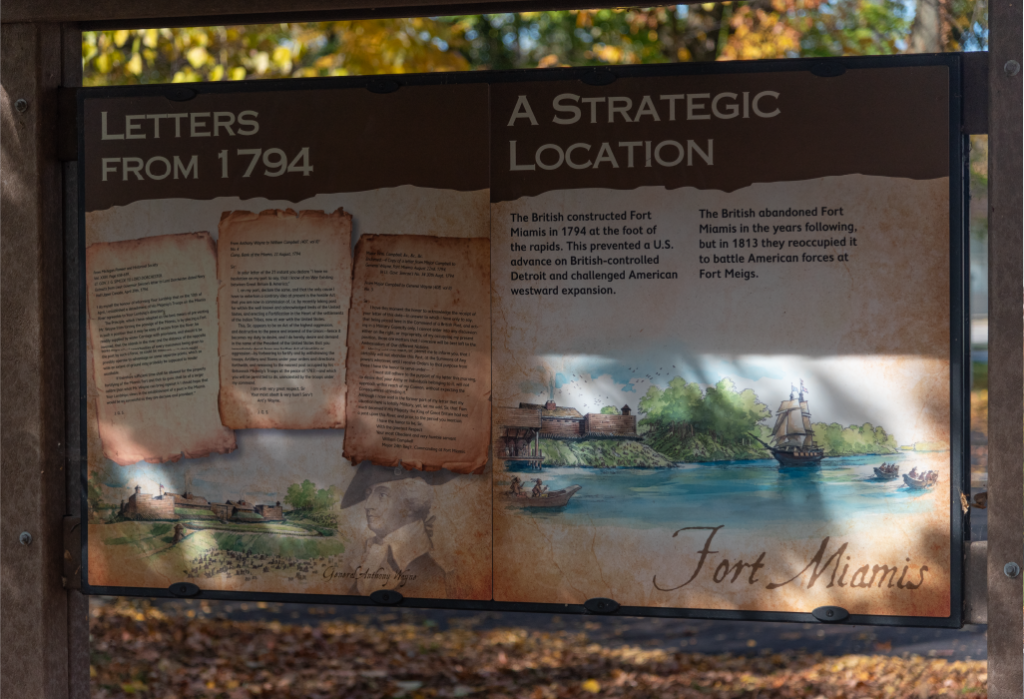 Near this site, in the War of 1812, stood the British encampment during the First Seige of Fort Meigs from May 1-9, 1813. This marker honors members of the 41st Regiment of Foot who died during the engagement. Killed in action on May 5, 1813 were Privates James Barkley, Richard Booth, William Carpmail, Samuel Cartledge, John Cox, Benjamin Dorman, John Dyer, Edward Graves, and Patrick Russell. Private Edward Billing died of wounds from battle May 6 and Private John Chamberlane expired May 20. 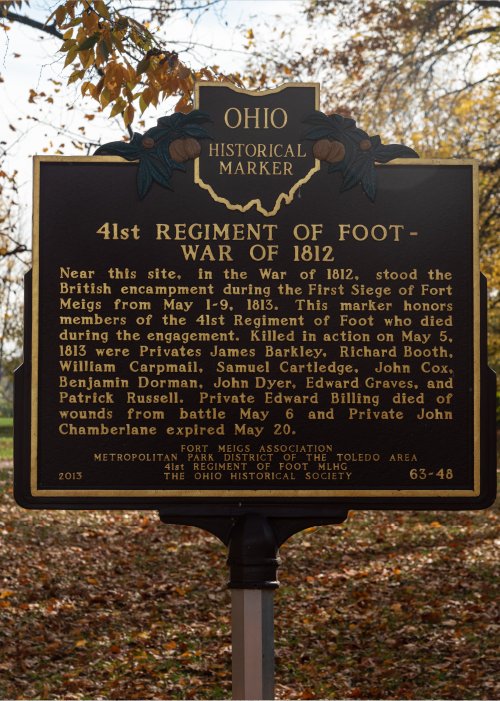 This marker describes the origin of Fort Miamis in 1794 and its role as a British stronghold in the final years of the Indian Wars and again during the War of 1812. It was erected in 1955 by The Historical Society of Northwest Ohio.

On this site in 1794, the British built Fort Miamis to block Gen. Mad Anthony Wayne's expected march on Detroit. Its strategic location commanded both the land and water routes in the Maumee Valley. The post, constructed after the manner of the noted French military engineer, Sebastien Vauban, was essentially an earthwork of ditches and embankments, re-enforced by log stockades and buildings. So impregnable did it appear that Gen. Wayne, after routing the Indians at Fallen Timbers (Aug. 20, 1794) did not attempt to take the garrison. By a provision of The Jay Treaty, Fort Miamis was surrendered to the United States in 1976. in the War of 1812, the site was re-occupied by the British under Gen. Procter and the Indians under Tecumseh when they unsuccessfully besieged Gen. Harrison at Fort Meigs.

Fort Miamis was designed and built by Royal Engineers in 1794 to defend land and water routes to Fort Detroit against a feared attack from American forces under General Anthony Wayne. Construction was never completed by the British, nor the Americans who later occupied the site, and no plans for the fort survived.

This illustration, created by R.K. Reed and shared with the permission of Toledo Metroparks, shows the fort as it existed on the west bank of the Maumee River, fortified by four diamond-shaped earthen walls -- called bastions -- and a 24-foot deep trench lined with rows of stakes.

Today, some of the trenches, traces of the earthen walls and one of the bastions are all that remain visible.