Fort Miamis (Miami) was a British fort built in the spring of 1794 on the Maumee River in what was, at the time, a territory of the United States designated by the federal government as the Northwest Territory.

The fort was located at the eastern edge of present-day Maumee, Ohio, southwest of Toledo. The British built the fort to forestall a putative assault on Fort Detroit by Gen. “Mad” Anthony Wayne’s army, which was then advancing northward in southwestern Ohio. 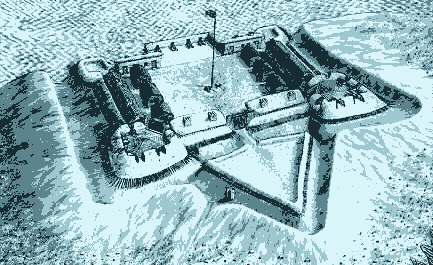 The History of Ft. Miamis

In spring 1794, the British built Fort Miamis to forestall U.S. Gen. Anthony Wayne’s advance on Britain’s Fort Detroit and to encourage the confederated tribes in their war of resistance. the fort was a log stockade, which had four bastions – each capable of mounting four cannons,– a river battery, barracks, officer’s quarters, supply buildings, and various shops. A defensive ditch, 20-25 feet deep, ran along the land side of the fort.

In July 1794, Gen. Wayne and his troops marched north toward Fort Miamis from Fort Recovery. Just south of their destination, they encountered a barricade erected by the Native Americans and a small party of Canadian militia. The general ordered a charge and the native forces fled to Fort Miamis, only to be shut out by the commander.

A year after their defeat at the Battle of Fallen Timbers, tribal elders gathered at Fort Greenville for negotiations with Gen. Wayne, resulting in the Treaty of Greenville that opened most of the present state of Ohio and part of Indiana to United States settlement. in 1796, under the terms of the Jay Treaty (1794), the British abandoned Fort Miamis and their other forts on American Soil. Wayne occupied and garrisoned it, but it was abandoned by 1799.